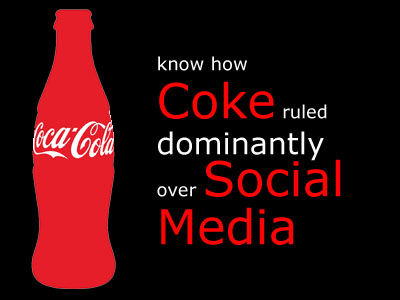 Knowingly or unknowingly, you would have liked Coke in social media portal like Facebook (FB) or followed on twitter. Coca-cola is the biggest brand in social media and ruling dominantly the vast magnitude of social media.

It is the matter of high surprise and inspiration that how Coke has expanded its brand to multi-million Facebook users.

In an interview, Wendy Clark, SVP of Integrated Marketing Communications and Capabilities at Coca-Cola (KO) has shared her insights about making of a giant social brand in social media world.

Share Something Sharable
In a world, where people come to seek something new and interesting, it is a brand’s responsibility to come up with interesting contents, which can suffice the thrust of reading or watching interesting stuffs over social media.

In this way, coke prefers to develop its social media contents while keeping two kind of audience in its mind.

The first kind relates to existing 59 million Facebook Fans and 672827 Twitter fans. For Coca-Cola, its fans are not in just confines of these numbers.

It takes responsibility of developing share-worthy contents to enable our fans to share further.

Listen Your Consumers
Gone are the days, when it was enough to say, “We will get back to you on this issue”. Now, social brands are focusing on listening customer’s voice.

Coca-Cola has taken a step forward to give human interaction to this large number of fans.

When a coke’s fans raise a question, post something on its pages, and share their first coke experience, Coke people comes out to interact actively.

It is probably the groundbreaking reason that backed this soft-drink provider in its social media campaign.

Be Consistently Frequent Player
Coke is probably the biggest consumer brand over Facebook.

It has been following a special strategy to become the number one. This multinational conglomerate believes in visualizing a big dream, taking a little step, and walking fast towards the goal.

You as social media brand need to be frequent in your posts. However, your posts should be of high-standards.

The initiation can be sort of small one but the speed of progress should certainly be high.

The high-speed projection of customer driven activities at Facebook has helped Coke in registering a feat in social media branding industry.

Coke creates the every bit of its content be it the bottle covers, TV advertisement, and social media presentations, and sponsored campaigns with keeping the social element in the core of promotional content.

Content Is the New Currency, Spend Carefully
Since people have stepped their feet in publisher’s shoes, the content value has went in deflation mode.

Social media users are posting millions of bytes over web with every passing second of time.

Therefore, you should create and post your content carefully. Coca-Cola has embodied the fact word-by-word and emphasize on creation of highly interesting & shareable content for its social media profiles.

Let Your Fans Create Contents
It is relatively a new trend in social media wires.

Coca-Cola prefers to let its so-called fans and followers to share their love for coke at our social media pages.

However, it still keeps a lenient eye on the quality of the content. Technically, Coca-Cola creates 10-20% of contents and 80% of total social media content comes from its social media fans & followers.

Channelize Your Stories & Find the Orators
Considering the impact of storytelling, Coca-Cola is introducing a new trend in social media branding.

It conveys updates like winter nights stories and appreciates the orators to channelize its stories further.

It is a newest trend in social media. Social media fans love to share the shareable contents within their peer circles, especially when it comes from a page like Coca-Cola.

Therefore, it has helped the soft-drink giant in registering a remarkable sign in social media universe.

You can also take insights after reading the golden strategy that turned Coca-cola in a biggest consumer brand over social media to increase the ladders of social media success.
Author bio – Nick Carter is a freelance writer who is associated with wordpress development company. This is the most prominent IT hub & also provide the service for hire wordpress developers for open source solutions.

Author bio – Nick Carter is a freelance writer who is associated with wordpress development company. This is the most prominent IT hub & also provide the service for hire wordpress developers for open source solutions.

How Is Google Using Big Data

How to Make a Difference?